Eva Ruiz-Gomez and her supporters went into Monterey County family court Friday fearing the worst. Given previous comments by Judge Susan Matcham, they believed Ruiz-Gomez’s 14-year-old son could be taken away from his mother.

“This court’s going to make some orders on November 9th,” Matcham said on Oct. 29. “Doesn’t matter at this point really what the parties agree with or not agree with.”

It’s the latest chapter in a saga that has gripped dozens of Peninsula residents, people who believe Ruiz-Gomez and her family are being ripped apart by a court system that’s unjust and unfairly targeting a sympathetic mother.

Ruiz-Gomez, 38, has been in and out of family court almost as long as her 14-year-old son has been alive. In 2002, when the boy was 3, she obtained court permission to take him to Mexico, where she and her new husband planned to open a bed and breakfast.

Ram n Muñoz, the father of her boy, claimed in court records she never provided him with an address to visit the boy and that he was basically kidnapped. A year after Ruiz-Gomez returned to California in 2010, the boy was taken from his middle school and placed with his father. Twelve days later, a different judge ordered him back to his mother.

Friends cite those 12 days as one of the many reasons the boy doesn’t want to be with Muñoz — he was traumatized, they say. The boy calls Ismael Garcia, his mother’s husband, “father.” Garcia has raised the boy since he was about 2.

However, the courts have ordered reunification therapy for Muñoz and the boy ever since he was returned to his mother in 2010. The boy arrives to the reunification sessions, and leaves after about 15 minutes, according to friends who accompany the boy.

“The judge blames Eva for the child not being friendly with the father, but (Matcham) doesn’t understand that there can’t be reunification when there’s never been a relationship,” said Helen Rose, a family friend and one of Eva’s dozens of supporters.

Ruiz-Gomez is also battling criminal charges for intention to deprive custody. She’s refused to plead guilty for fear that a conviction would give Muñoz more leverage in trying to get custody of their son.

The fights in multiple arenas have taken a financial and physical toll on Ruiz-Gomez. Her many court appearances prevent her from working, which means the only income to pay for everything from food to legal bills is her husband’s job as a groundskeeper at Monterey Peninsula resorts.

On Friday, as about 30 supporters gathered outside the courtroom in Monterey, Ruiz-Gomez walked in with her 14-year-old son to hear Matcham’s verdict. About 20 minutes later, she came out of the courtroom, eyes glazed and a bit shaken. She mumbled something then collapsed to the ground. Soon she began shaking uncontrollably.

Ruiz-Gomez suffers from dysautonomia, a condition that affects the autonomic nervous system, the one that controls breathing and heart function, among others. When faced with tremendous stress, Ruiz-Gomez goes into convulsions, something that’s happened at least twice before in court.

Her husband and friends surrounded her, pressed wet paper towels to her forehead and nape of the neck. The paramedics were on their way, a sheriff’s deputy announced.

After tending to Ruiz-Gomez, the paramedics with Monterey Fire took her to the hospital, strapped to a gurney.

Several minutes later, Ruiz-Gomez’s lawyer emerged from the courtroom, the 14-year-old at his side, and told supporters what had happened. The judge ordered the boy to visit with his father once a week for three hours, at a public place.

Supporters were relieved. The boy would not be taken away from his mother.

“He held his own,” Dominic Flamiano, the family’s attorney, said. In court, the boy told the judge he considers Garcia his dad, not Muñoz.

The teenager embraced his grandmother and together they wept.

On Dec. 19, Ruiz-Gomez is scheduled to appear in criminal court. Her lawyer will make an argument to have the criminal charges dismissed.

Claudia Meléndez Salinas can be reached at 753-6755 or cmelendez@montereyherald.com.

Listen to the radio interview on KPFA, 94.1fm with Valori George of Friends of Eva and Kathleen Russell of the Center for Judicial Excellence. 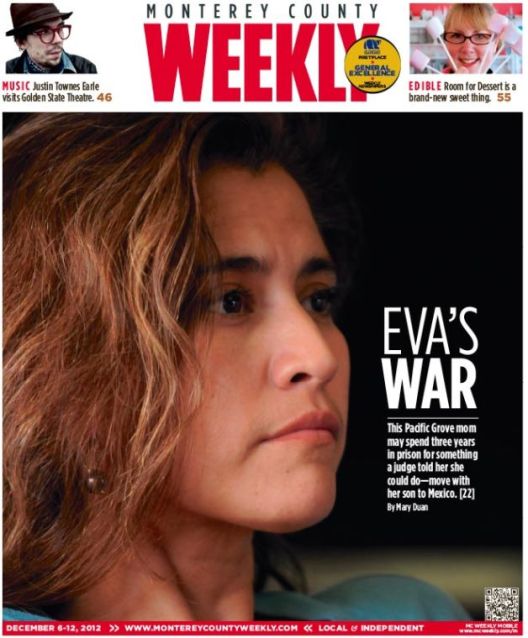 Does the system work?

On January 25, 2013, felony kidnapping charges against Eva Ruiz Gomez were dropped. For two and a half years the Monterey County District Attorney’s office had relentlessly pursued its criminal case against Eva, and from the very beginning the judges had prejudged the case and publicly declared that Eva was guilty. The judges effectively prosecuted from the bench, and the five deputy district attorneys who took turns on Eva’s case of course welcomed their assistance.